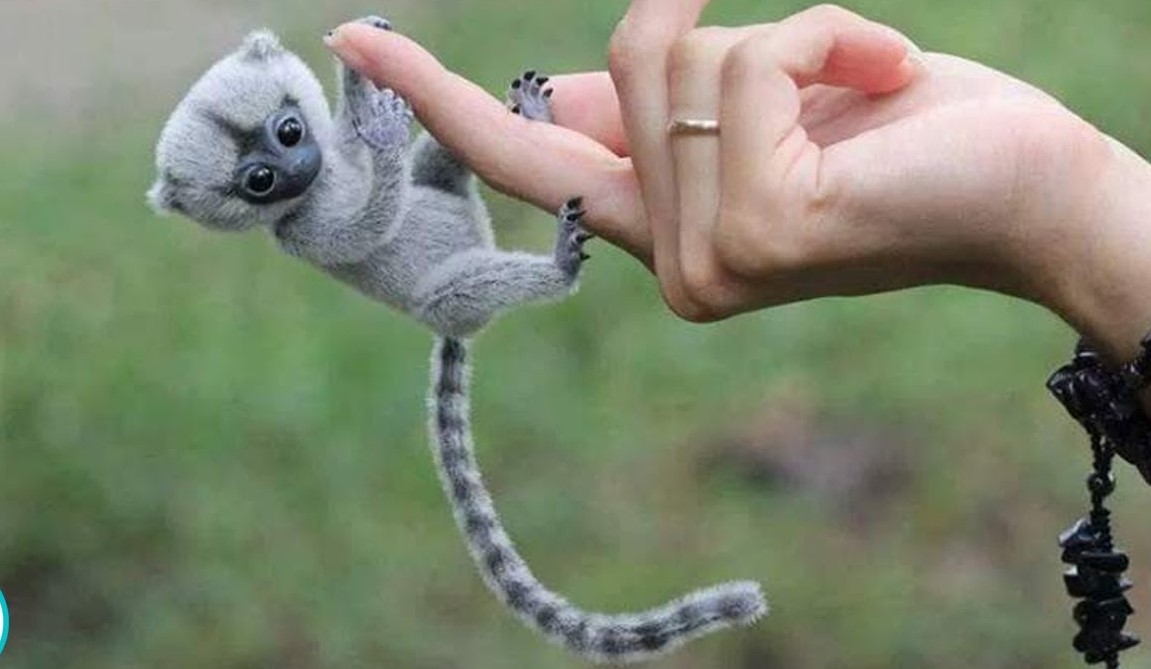 The most popularly kept and sold primate is the marmoset monkey also known as the Finger monkey. The majority of animals are common marmosets, but we also occasionally observe Geoffroy’s marmosets and hybrids between the two.

The Western Amazon basin’s rainforests are where the Finger Monkey first appeared in South America. Today, you may still find them in Bolivia, Brazil, Ecuador, Colombia, Peru, and Brazil.

These ridiculously small primates can literally cling to a human finger. Now the main question is, are these cute little creatures real and if so, do they make good pets?

Simply put, Finger Monkeys do not make good pets. They are wild animals and hard to tame. They are known to be aggressive, have a bad temper, and frequently bite scratch, and attack. They constantly fight with each other, create loud screeching noises, and throw feces when angry!

They can be costly both initially and over time. Additionally, they are illegal in about 20 US states. There are several factors to think about before getting them as pets.

Read this article and make your own decisions! You can decide if a pygmy marmoset or finger monkey is the best pet for you based on the facts provided here.

What are Finger Monkeys?

Finger Monkeys are the tiniest species of monkeys and one of the tiniest primates still living. Their scientific name is the pygmy marmoset. They are often referred to as Pocket Monkeys, Thumb Monkeys, or Little Lions because of their incredibly small size.

Callitrichids are the name for these smaller New World monkeys, but there’s a catch. The phrase “finger monkey” is very deceptive.

Showing these animals clinging to people’s fingers seems to be a marketing ploy some vendors use to increase interest in the small primates and perhaps make them seem more like desirable pets. This is unfortunate because primates in general make difficult pets for regular pet owners.

The South American rainforest is home to the finger monkey, which lives in the treetops. There is a widespread misunderstanding regarding the size of finger monkeys.

People frequently estimate their height from a person’s finger. It’s most likely because of their name. The second explanation could be due to the photos on the internet clinging to people’s fingertips.

In actuality, a fully grown finger monkey will have fingers that are larger than those of humans. Without taking into account the height of its tail, which can increase to a maximum of 8 inches, its overall length may be between 5 and 6 inches.

The small size of finger monkeys makes it simple for adults to hold them in their palms. This demonstrates that they have an extended tail that is longer than their actual body length.

Lifespan Of a Finger Monkey

Finger monkeys often live a lot longer in captivity, as is the case with practically other creatures, domesticated or not. Pygmy marmosets, kept as pets typically live for 15 to 20 years. Since they are prey animals and fall from trees, wild animals don’t live as long.
“

These types of tiny monkeys are frequently sold as exotic pets. None of these species can attach themselves to a human finger when they are fully grown. They compensate for their tiny size by needing a lot of care.

Standard marmoset (Callithrix jacchus) Most people keep this kind of primate as a pet, by far.

Finger Monkey’s Life In The Wild

Finger monkeys lead very sociable lifestyles in the wild. One male, one female, and all of their offspring reside in tiny groups with them. Between 2 and 10 monkeys can make up a group of finger monkeys. Although finger monkeys are mostly monogamous, a second guy may occasionally be present to help with baby care.

Normally, female finger monkeys give birth twice a year, almost often to twins. One or three monkeys may occasionally give birth, but this is less frequent. For the first two weeks of the baby’s existence, the males exclusively care for it, unlike many other animals.

Finger monkey ownership is rising because these animals are little and adorable, as you might imagine. Let’s face it: looking at these monkeys is simply impossible to resist. Who wouldn’t desire a joyous bundle the size of a finger?

Due to their relatively small size, finger monkeys are also more cost-effective to maintain. The cost of keeping a pet finger monkey is thought to be among the lowest among larger monkeys and primates. Even while they still require thousands of dollars to obtain them, their food budget needs are significantly smaller.

Why Are Finger Monkeys Not Good Pets?

Too Wild To be Tamed

To put it plainly, finger monkeys can not be domesticated. They, therefore, do not adapt to life in captivity as well as dogs, cats, and some birds do. Finger monkeys kept as pets may become sad, frustrated, bored, or overly anxious. Given that finger monkeys are already known to be violent, this result is very frightening. Male Finger Monkeys are very violent and prone to feces-throwing in the wild.

Even if a finger monkey couldn’t murder you like a gorilla, it may nonetheless be very aggressive and destructive when kept in captivity. They might damage your residence, hurt you, or hurt other occupants.

Marmoset monkeys are intelligent creatures, and the first few years of life are critical for them to develop positive and negative habits. You must be prepared to uphold your commitment to parenting them despite poor behavior since once formed, they remain with them for life.

Need a Lot of Space

If you haven’t already, you might want to think about how difficult it is to replicate a wild monkey habitat.

Monkeys need an extra-large cage with water, trees, vines, and swings even if they are small, so they can jump, play, and climb much like they would in the wild. They favor warm, sunny environments with direct sunshine, and they eat a lot of vegetables, insects, fruits, and trees. A baby marmoset needs to be fed every two hours if you have one. This is not only a difficult excursion but also one that most regular people cannot afford.

This doesn’t even take into account the initial cost of the monkeys themselves, along with the high expenses that go along with their way of life. You need to get at least two Finger Monkeys for the animals to be content because they love to live in groups.

The amount of human company required to keep these social butterflies cognitively engaged is far insufficient. Without factoring in the upfront cost of a cage, toys, or plants, the cost of a single monkey might reach up to $8,000.

Keep in mind the distance needed to get a vet who specializes in exotic animals, as well as the high costs associated with wellness exams and diseases that can spread from people to monkeys.

Unfortunately, most individuals can only afford to buy one monkey because they do not have the money to buy two. The monkey’s feelings of boredom, sadness, and rage only intensify as a result.

The last drawback of owning a finger monkey is that they are prone to a variety of human diseases. In contrast to dogs, finger monkeys can contract the common cold, chicken pox, and even HIV. As a result, it may be highly challenging for patients to provide medical treatment.

Still Want a “Finger Monkey”? Are They Right For You?

Pet finger monkeys are not a good idea. Since they are wild animals, they require highly particular living arrangements and concerns. Regular people who own pets simply lack the knowledge, capacity, facilities, or resources necessary to meet the needs of Finger Monkeys.

Having said that, pros can use Finger Monkeys. For instance, because they are so adorable to look at but still have all the resources they require, they can be a wonderful addition to a zoo with a good reputation and a license. Again, only experts who are knowledgeable about how to properly care for these vulnerable animals should handle finger monkeys.

Have you still been tempted to pet this small creature? Then you need to go through the following checklist before considering buying them-

How to Care for a Finger Monkey

Replicating a Finger Monkey’s natural environment is essential for proper care. This includes having a very sizable habitat with lots of room for climbing and swinging.

At least two Finger Monkeys, if not more, must fit comfortably in the cage. The huge cage must be outside in full sunshine to achieve the greatest results.

They primarily consume tree sap and gum. Being fed every two hours, baby finger monkeys in particular require a unique diet. In case your Finger Monkey becomes ill, make sure to have a specialist exotic veterinarian who treats monkeys and Finger Monkeys on hand.

How much does a finger monkey cost?

Between $1,000 and $8,000 is the initial cost for a single finger monkey, including the required cage and consumables. Keeping finger monkeys as pets is expensive in terms of cash, time, care, space, and research.

Is a finger monkey hard to take care of?

Finger monkeys are very hard to take care of as they are too wild and can get your cold, chicken pox, and even HIV.

Can you potty train a finger monkey?

You can not potty train monkeys as they have horrible toilet habits. Like most monkeys, finger monkeys play, urinate, and throw their feces around the house, making a large mess. Even if you potty trains them at a younger age, they eventually lose the ability as they mature.

Is it legal to own Finger Monkey as a pet?

Here is a list of states where owning a finger monkey is (or at least maybe) permitted:
At the time of writing, no permits are required to own a monkey in Alabama, Nebraska, Nevada, Montana, North Dakota, Kansas, Iowa, Missouri, Arkansas, Wisconsin, Illinois, Ohio, West Virginia, and Virginia. However, check again before you buy! Laws are constantly evolving.